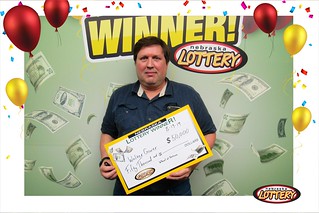 Walter Gower of Fairbury won $50,000 playing the Wheel of Fortune Scratch game from the Nebraska Lottery.

When Gower claimed his prize at the Nebraska Lottery’s Lincoln offices, he said he’d been eating breakfast in the parking lot before heading to work when he scratched off the winning ticket.

“I was a little stunned,” Gower said. “I won on the first number I scratched off. Usually I have to scratch all the numbers off.”

Gower said he took the ticket to work that morning and left it in his glove box until he could make it to Lincoln to cash it in. He’s planning to invest his winnings.