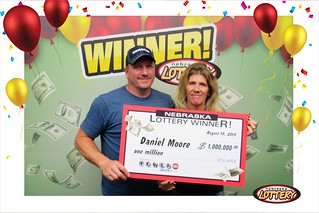 Moore purchased his winning ticket at Parkview One Stop at 102 Colfax St. in Schuyler. The ticket contained three quick pick plays, one of which matched five out of five winning numbers (18, 21, 24, 30, 60) but not the winning Powerball number (20) from the August 17 drawing.

Moore said he’s a regular Powerball player and was checking tickets in his truck after work when he discovered he’d won. Moore said he yelled “Thank you,” upon discovering he’d hit the $1 million prize.

“I checked them at the store and the clerk’s eyes got really big,” he said.

Moore said he’s planning on using his winnings to pay off his house and a couple of vehicles, but there’s something he wants to do that’s a little closer to his heart.

Moore’s father died in the spring and he’s wanted to buy his dad’s excavating business from his mother.

“Dad was looking down on you,” Moore’s mother told him after his win.