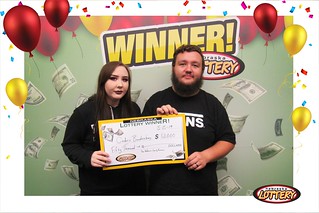 Brandenburg, who claimed his prize on August 15 at the Nebraska Lottery’s Lincoln office, said that he bought the ticket for his best friend and roommate Shelby Pullins—who is a big fan of The Addams Family—for her to scratch off on a drive.

When Pullins saw that she’d scratched off the $50,000 top prize, she had a hard time getting the words out to tell Brandenburg.

“She just barely whispered it out,” he said. “We were driving down the road and I nearly had a panic attack.”

Brandenburg said the winnings will be used to pay off his car and some of it will be invested. He and Pullins are also planning a trip to Canada.

“We never expected to win,” Brandenburg said. “Looking at it now, it doesn’t seem real.”