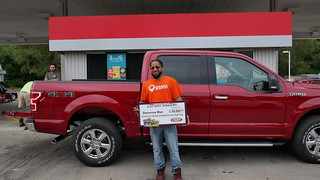 Domorrow Blair of Bellevue is the sixth winner of a 2019 Ford F-150 XLT 4x4 SuperCrew Flex Fuel truck in the 24th edition of the Nebraska Lottery’s $2 Truck$ & Buck$ Scratch game.

Blair said that he’s been playing Truck$ & Buck$ for three years and wasn’t that surprised that he won the top prize.

“I knew I was going to win it,” he said. “I saw it before it happened. A year ago, I saw myself winning it. I saw myself with three kids and a truck.”

While Blair has a new truck, he’s still a few months away from the number of kids he saw, as his wife Lorene Watts is pregnant with their third child.

Blair, who works as an independent contractor, said that the new truck will come in very handy as his family was down to a single vehicle. Watts called it a blessing.

Before hitting the open road or taking any vacations, Blair said the first thing he’ll be doing with the new pickup is filling it up with backpacks for kids who can’t afford them. He does a lot of work with Omaha United for Youth and said the truck with help with that.

“I can see myself winning another one,” Blair said. “Maybe even that last one.”