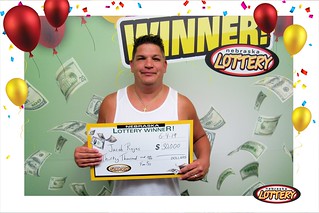 Rojas purchased his winning ticket at Smoker Friendly #016 at 1325 2nd Avenue in Kearney.

When he came to claim his prize on June 4, Rojas said he plays Scratch tickets once every couple of weeks. He won $1,000 a few years ago on a Nebraska Lottery Scratch ticket, but this $30,000 top prize is his biggest win yet.

“I was a little bit shocked,” he said. “I was at home playing video games when I scratched it off.”

Rojas said he’s planning on using his winnings to cover some bills and to pay off his car.