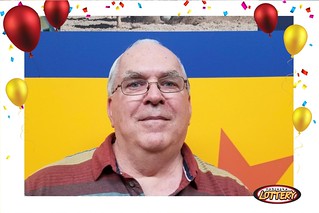 Charles Kalkowski of Lynch won $22,000 playing 2by2 from the Nebraska Lottery.

Kalkowski purchased his winning ticket from Lynch Hometown Market at 416 West Hoffman Street in Lynch. The ticket contained the winning Red ball numbers (05, 14) and White ball numbers (15, 26) from the March 23 drawing on a free ticket.

When Kalkowski claimed his prize on May 29, he said he’d been checking his numbers on a Sunday morning when he discovered he won.

The win came at a good time for Kalkowsi, he said, because a couple of months ago his house was under about five feet of water after the Ponca Creek flooded.

There’s a lot of work to be done on the house, he said, but after he fixes what needs to be done around the house, Kalkowski is planning on donating some of the money to a nearby church that was also hit hard by the flooding.

“I’m going to be very happy to be able to do that,” he said.