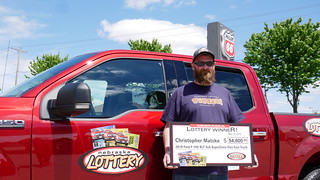 Chris Matzke of Lincoln is the third winner of a 2019 Ford F-150 XLT 4x4 SuperCrew Flex Fuel truck in the 24th edition of the Nebraska Lottery’s $2 Truck$ & Buck$ Scratch game.

Nebraska Lottery officials presented Matzke with his prize on Friday, May 10 at U-Stop. He said that he almost exclusively plays $1 Scratch tickets, but after winning $70 on Quick 7s, he decided to play something different.

Matzke bought his tickets on Saturday, May 4, and had to wait until Monday to call the Nebraska Lottery. Matzke said he spent all weekend pacing before he could turn in his winning ticket.

When he came to drive his truck home from an event at U-Stop on Friday, Matzke said the last few days felt like the longest week of his life, but he was very happy to be heading off to pick his kids up from school in the Ford F-150.

“This is great,” he said. “I never thought I would own a brand new pickup.”