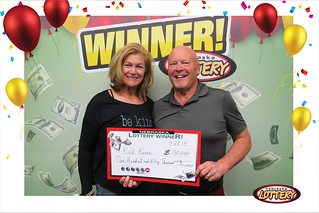 Kanne purchased his winning ticket from Family Fare #11 at 1221 S 203rd St. in Omaha. The winning ticket contained one play that matched four out of the five winning numbers (01, 15, 17, 66) with the winning Powerball number (15) from the April 17 drawing. Because he purchased the Power Play option, Kanne’s prize was tripled to $150,000.

When he came to claim his prize at the Nebraska Lottery offices in Lincoln on April 22, Kanne said he found out he’d won while on vacation and sitting in a restaurant in Las Vegas while waiting for his family.

“That’s a great way to start a weekend in Las Vegas,” Kanne said. “I was in Vegas, but I didn’t win there.”

Kanne said he plays the same sets of numbers for every drawing. There’s no special meaning behind his numbers, he just got them on a quick pick once and decided to keep playing them.

Kanne said he’s going to continue playing the same Powerball numbers until he hits the jackpot.

“I’ve already got my tickets for next week’s drawing,” he said.

Powerball is a multi-state jackpot game currently offered by 44 state lotteries, the District of Columbia, Puerto Rico and U.S. Virgin Islands. The odds of winning $150,000 playing Powerball are 1 in 913,129.18 while the overall odds of winning any prize are 1 in 24.9.