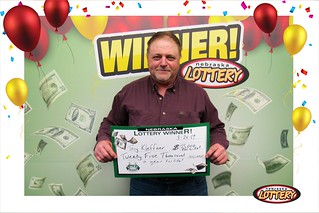 Troy Kleffner of Spalding won $25,000 a year for life playing Lucky for Life from the Nebraska Lottery.

When he claimed his prize at the Nebraska Lottery offices in Lincoln on March 26, Kleffner said that he’s a regular player and purchased his tickets at the store run by his mother Connie Kleffner and right next to the tire shop he owns.

Word spread quickly and people who worked at the businesses started calling him on Monday night, asking if he was the one.

“My mom called me to tell me they sold a big winner” Kleffner said. “I brought my tickets in and checked them and it said I won $390,000. It hasn’t really sunk in yet.”

Kleffner said he’s planning on using some of his winnings to help with his kids’ college fund.

Kleffner’s win was the biggest Lucky for Life win in Nebraska since the Nebraska Lottery began offering the Lotto game on August 20, 2017.