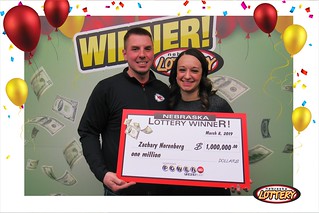 Norenberg purchased his winning ticket at Hy-Vee Gas at 828 East 23rd Street in Fremont. The ticket contained three plays, one of which matched five out of five winning numbers (06, 10, 21, 35, 68) but not the winning Powerball number (23) from the March 6 drawing.

Norenberg said he bought the tickets on a whim while dropping his daughter off before he went to work. He stopped to fill up his truck and to grab an energy drink and noticed that the jackpot was at $381 million, so he decided to purchase a few, picking numbers based on the birthdays of family members.

He was watching the KETV Channel 7 news when he saw some numbers that looked familiar and ran to check his ticket. When he discovered he’d matched five of them, he ran to wake his wife Shelby to have her check before calling his parents and in-laws to make sure.

The Norenbergs are planning on using some of the money to pay off their student loans and their mortgage. They also think it will be a big help with their 14-month old daughter and a new baby that’s on the way.

Norenberg said he already had an appointment set with their financial advisor for the day after winning.

When they came to claim their prize on March 8, the Norenbergs said that right after they finished up at the Nebraska Lottery offices, they were heading to Des Moines for Zach’s brother’s wedding.

When they stopped to get gas on Friday morning, they said they were already contemplating another win.

“I already bought one for the next drawing,” Zach said.

“I think I’m going to get one too when we get to Des Moines,” Shelby said.