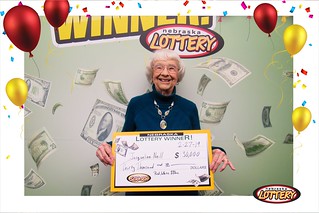 Neill, who claimed her prize on February 27 at the Nebraska Lottery’s Lincoln office, said that she’d received quite a few Nebraska Lottery Scratch tickets as Christmas gifts, but had left them unscratched until about three weeks after Christmas.

She woke up early one morning and decided to scratch them off. She hit a few smaller wins before she got to the Red White & Blue ticket. She scratched it off and had to get a couple sets of eyes on it to make sure she’d won.

“I went over and woke my husband,” she said. “Then I called my son Michael to make sure I was seeing it right.”

Michael called the Nebraska Lottery offices to confirm the win. Once it was all settled, they made a plan to come claim the prize.

Neill said that she doesn’t have any big plans for her winnings, but is planning on investing some of the money.

“I was very happy,” she said. “I was shocked. This was really a surprise.”