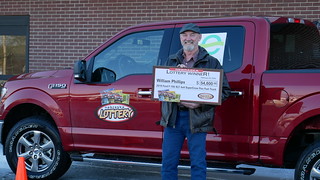 William Phillips of Seward is the first winner of a 2019 Ford F-150 XLT 4x4 SuperCrew Flex Fuel truck in the 24th edition of the Nebraska Lottery’s $2 Truck$ & Buck$ Scratch game.

Nebraska Lottery officials presented Phillips with his prize on Wednesday, February 20, at Pac N Save. He said that he purchased the truck-winning ticket as part of a birthday gift for his mother. “I stopped at Pac N Save to pick up a birthday card, and I saw that they had Truck$ & Buck$, so I bought ten tickets. But they wouldn’t all fit into the envelope,” said Phillips. “So I put in five of them and kept the rest. And one of the ones I left out won the truck.”