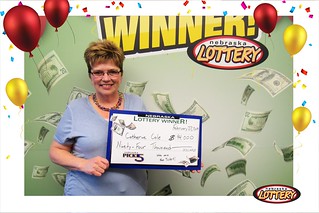 Cole won her winning ticket as a prize from a previous Nebraska Pick 5 play. The free quick pick ticket was generated at Hy-Vee Gas, 3012 23rd Street in Columbus, where Cole always purchases her tickets. The ticket contained one play with the winning numbers 07, 17, 24, 25, and 28 from the February 19 drawing for the $94,000 jackpot.

While claiming her prize at Nebraska Lottery headquarters, Cole told Lottery officials that she plays Nebraska Pick 5 every day. She learned she had won after a friend who also plays Nebraska Pick 5 regularly told her there was a winner in Columbus. “My friend found out first and sent me a message saying, ‘It wasn’t me – was it you?’ So I checked the numbers, and it was me!” said Cole. She plans to take her grandchildren on a trip to Disney World using her winnings.