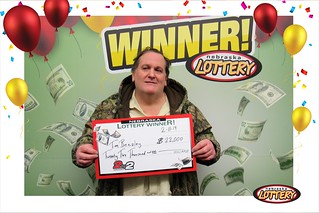 Tim Beezley of Fremont won $22,000 playing 2by2 from the Nebraska Lottery.

Beezley purchased his winning ticket from Fuel Express at 1305 East Morningside Road in Fremont. The ticket contained the winning Red ball numbers (19, 22) and White ball numbers (13, 18) from the February 10 drawing.

When Beezley came to the Nebraska Lottery offices in Lincoln to claim his prize on February 11, he said that his persistence paid off.

Beezley said that he plays 2by2 and Nebraska Pick 5 regularly and, while he’s come close, this is his first time winning big. After a couple of recent $100 2by2 wins, he said he felt like he was going to hit it soon. When he discovered he’d won the jackpot, Beezley said he was thrilled.

Beezley is planning on using some of the money to pay off a couple of bills and saving most of it.

Even though he’s won the top prize, Beezley said he’ll keep playing. He buys week-long 2by2 plays and, even though he won the jackpot on a Sunday, he said there’s another day that brings him more free tickets and $100 winners than others.

“Saturday seems to be my day,” he said.