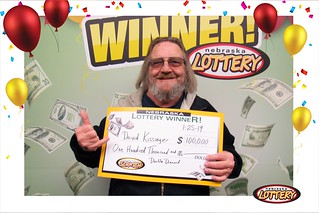 Kissinger purchased his winning ticket at Super C #4 at 501 West A Street in Lincoln.

When Kissinger came to claim his prize at the Nebraska Lottery’s Lincoln office on January 25, he said that while this might have been his biggest win, it wasn’t his first.

Kissinger won $10,000 on a Nebraska Lottery Scratch ticket back in October of 2018 and a few other $1,000 prizes before that. He even won a television in a drawing at a supermarket not too long ago.

Even with all those wins under his belt, Kissinger said he still had a hard time believing he’d won the $100,000 top prize.

“I was shaking when I took the ticket up to the clerk to get it checked,” he said. “I think she was more excited than I was about the win.”

Kissinger said he’s not sure what he’ll use his winnings on, but he’s planning on paying off a few bills to begin with.