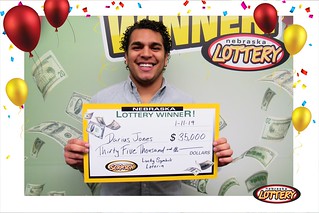 When Jones came to claim his prize at the Nebraska Lottery’s Lincoln office on January 11, he said that when he scratched off the winning ticket he just stared at it for a few minutes and then ran to the bathroom at work to call his mom.

Jones said he’s planning to use the $35,000 prize to pay off his car and to put a down payment on a house.

He’s still new to buying Scratch tickets, but now that he’s won the top prize, Jones said he’s planning on spreading some of his luck. On the drive from Creighton to Lincoln and on the way back home, he was planning on buying tickets along the way.

“We’ll buy some at every gas station,” he said. “I’m going to put them in a bowl and everyone can grab one at work.”