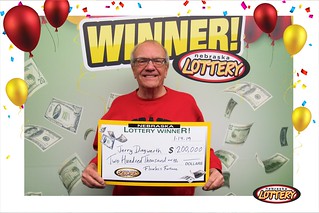 When Dingwerth came to claim his prize and the Nebraska Lottery’s Lincoln office on January 14, he said an early morning coffee run led to his big win.

The convenience store where he usually gets his 5 a.m. coffee was closed, so he headed down the street to Casey’s where he also cashed in a $40 winning ticket. He bought a few extra tickets to take home to scratch off with his wife Donna.

“I scratched it off and thought, ‘This can’t be right,’” Dingwerth said.

He took the ticket back to his usual coffee stop to check and, sure enough, he’d hit the $200,000 top prize.

The Dingwerths are planning to use their winnings to do some home improvements. They’re also planning to continue buying Scratch tickets.

“We’ll keep playing,” Donna said. “We had some this morning on the way.”