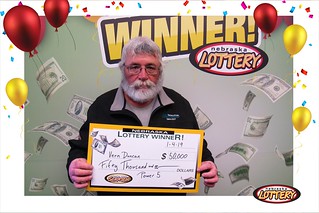 When Duncan came to claim his prize at the Nebraska Lottery’s Lincoln office on January 4, he said he plays Scratch tickets pretty regularly, but this is the first time he’s hit a prize this big.

Duncan said he bought the ticket last Thursday, put it up on the dashboard and promptly forgot about it until Sunday. When he remembered the ticket, he scratched it off on the hood of his truck. When he saw he’d hit the $50,000 top prize, Duncan said he took off his glasses and rubbed his eyes in disbelief.

“I about had a heart attack,” he said.

Duncan said he’s planning on fixing up some of his vehicles, putting some aside for retirement and taking a few days off from work and going out of town to have some fun.