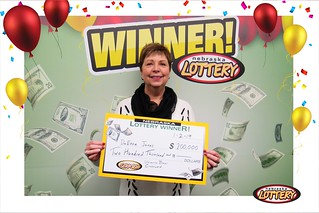 When Jonas came to claim her prize at the Nebraska Lottery’s Lincoln office on January 2, she said she doesn’t really play Scratch tickets very often, and had received her winning ticket as a Christmas present.

“I was in disbelief,” she said.

The clerk who checked the ticket at Casey’s was just as shocked as she was, Jonas said.

Jonas said she’ll be spending some of her winnings to pay off some bills and invest the rest of it.