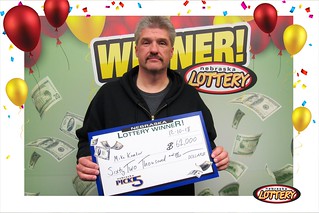 Kantor purchased his winning ticket from Taylor Quik-Pik at 1807 Washington Street in Blair. The ticket contained one play with the winning numbers 01, 05, 07, 14 and 32 from the December 5 drawing.

While claiming his prize at the Nebraska Lottery offices on December 10, Kantor said he’s a regular player of all the Lotto games, but this is the most he’s ever won before.

“I had to check it three times,” Kantor said. “I was shocked.”

Kantor said he’s planning on paying off some bills with his winnings. He’s won big, but he’s still planning on playing the Nebraska Lottery’s Lotto games.