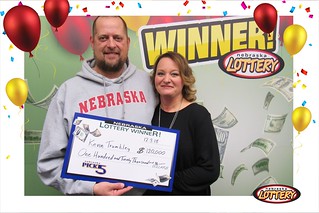 Trumbley purchased his winning ticket from Super Saver #11 at 5460 South 56th Street in Lincoln. The five-play quick pick ticket contained one play with the winning numbers 04, 12, 18, 36 and 37 from the December 1 drawing.

While claiming his prize at the Nebraska Lottery offices on December 3, Trumbley said he’d stopped to buy some fried chicken for his children at Super Saver and decided to buy some quick pick tickets. One of which won the jackpot.

Trumbley said he’s planning on paying off some bills, maybe taking a family vacation and putting some aside to help buy a new house in a couple of years.

He’s a regular player and even though he’s won the top prize, he said he’ll continue to play Lotto games.

“I love playing the lottery,” Trumbley said. “It’s the dream and this one came true!”