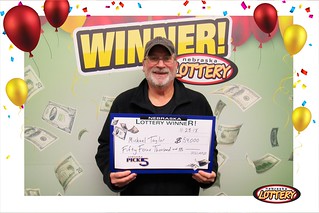 Taylor purchased his winning ticket from Hy-Vee Gas at 7101 Pioneers Blvd. in Lincoln. The tickets contained the single quick pick play with the winning numbers 10, 14, 15, 20 and 38 from the September 14 drawing.

Early in the morning on November 28, Taylor went to a convenience store to scan a pile of Lotto tickets to see if there were any winners. There were some free tickets in the bunch, but when he scanned the winning ticket it told him to bring it to the Nebraska Lottery offices.

Without checking the numbers to see what he’d won, he brought it to the front desk at Lottery headquarters in Lincoln where he was told he hit the Pick 5 jackpot.

Still reeling from the $54,000 win, Taylor said he wasn’t sure what he was going to do with the money yet, but wants to do something nice for his kids for Christmas.