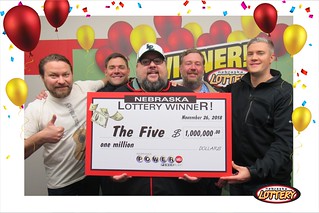 A group of five friends from Lincoln won $1 million playing Powerball from the Nebraska Lottery.

The group, made up of Douglas Murray, Felipe Osorio, Eric Cobb, Chris Hinkley and Yevgeniy Koval, purchased their winning ticket from U-Stop #11 at 2925 NW 12th St. in Lincoln. The winning ticket contained five quick pick plays, one of which  that matched five out of five winning numbers (07, 14, 23, 38, 55) but not the winning Powerball number from the November 21 drawing.

When the group—who decided to call themselves “The Five”—came to the Nebraska Lottery offices in Lincoln to claim their prize, they said they’ve been friends since high school and college.

Some of them have moved out of state and one of the friends moved to Panama since they met in school. The fact that they were all together at the same time they won is a bit of a coincidence, Murray said.

“We all came for Thanksgiving this year,” he said. “Usually we just come for Christmas. We found out we won on Black Friday morning.”

The group decided to start pooling their money during the jackpot run in October that led to Mega Millions topping out at over $1.5 billion and Powerball hitting $688 million. Murray takes their money to purchase tickets for each game over $100 million.

Even though they’ve hit the $1 million mark, they’re planning to continue playing.

“We’re gonna hit the jackpot,” Osorio said. “We’ll be back.”