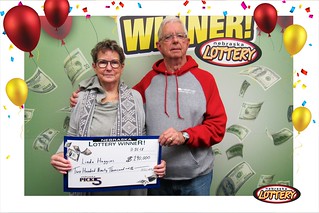 Huggins said that she and her husband Jack purchased their tickets on their way to a party to watch the final Huskers game of the season. November 23 is also the Huggins’ anniversary, which made it all the more unbelievable, Huggins said.

The Huggins’ are both retired and the money will be something of a cushion that will make things a bit more comfortable, she said, but they’re still planning on making good use of the money. They donate to the Salvation Army, the Humane Society and to their library, but now they’ll be able to donate a bit more, Huggins said.

They have children who live on both coasts who they typically only see once a year and this win will make it easier to see them more often. Huggins said they’re planning on giving some to their kids who she said have been a real help to her and her husband.

“This is pretty darn nice,” she said.