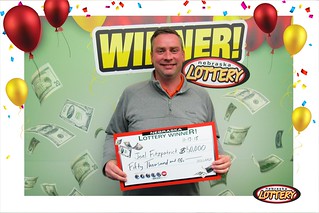 Fitzpatrick purchased his winning ticket from Hy-Vee Gas at 749 North 132nd Street in Omaha. The winning ticket contained one play that matched four out of the five winning numbers (41, 59, 63, 66) with the winning Powerball number (3) from the October 3 drawing.

When he came to claim his prize at the Nebraska Lottery offices in Lincoln, Fitzpatrick said the $50,000 winner had been sitting in a stack of tickets he’d been meaning to check.

Fitzpatrick said he’d been running some errands on a Saturday morning when he stopped by a convenience store to check the stack of tickets that dated back months. When the $50,000 ticket was scanned, the clerk was more shocked than he was, he said.

“It was pretty surreal,” Fitzpatrick said.

Fizpatrick said he doesn’t have too much in mind for his winnings yet, but his wife has had her eye on a new hot tub.

Powerball is a multi-state jackpot game currently offered by 44 state lotteries, the District of Columbia, Puerto Rico and U.S. Virgin Islands. The odds of winning $50,000 playing Powerball are 1 in 913,129.18 while the overall odds of winning any prize are 1 in 24.9.