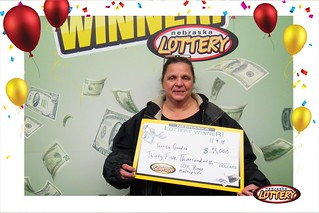 When Goodro came to claim her prize at the Nebraska Lottery’s Lincoln office on November 9, she said she’s been playing for years and other than a couple of small wins, she’s never hit it big. She’d just won $12 on a Scratch ticket and decided to buy 3 more $3 tickets with her winnings.

“I told the guy to gimme a little luck with it,” she said. “I went to scratch it and I couldn’t believe it, I had to look and look. I was in a state of shock.”

Goodro said the win came at the perfect time because she won the top prize just a few days after her birthday and just became a grandma to a set of twins. She’s planning to use the $35,000 to pay off her vehicle and help out her kids.

“Never thought in a million years I would win,” she said.