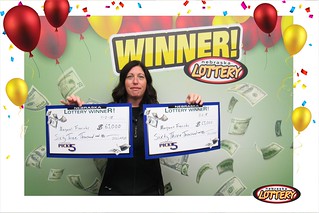 Frerichs purchased her winning tickets from Kwik Stop #08 at 217 East First Street in Ogallala. The two tickets each contained a play with the winning numbers 03, 10, 15, 26 and 32 from the October 26 drawing.

There was only supposed to be one winning ticket, Frerichs said. The cashier was in training and printed a single draw ticket instead of a ticket for five consecutive draws by mistake, she said. Both tickets had an entry for the same numbers on the October 26 drawing, but Frerichs said she’d take both of them.

After the October 26 drawing, Frerichs brought her winning tickets into work to put another set of eyes on them, she said.

“I had to have my coworkers double check the numbers,” she said. “I was a shaking mess.”

Frerichs and her husband Kevin came into the Nebraska Lottery’s Lincoln offices to claim her prize on Friday, November 2, the day before her birthday. They’ll be spending the weekend in Lincoln with their son who’s a student in town.

Frerichs said shes hoping to pay off her mortgage with her winnings.