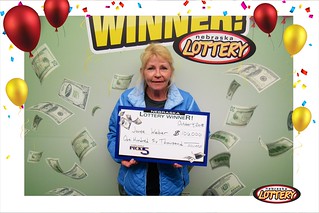 Weber said she plays Pick 5 every day and checks the Nebraska Lottery players hotline every morning.

While traveling out of town, Weber picked up a ticket for Tuesday’s drawing at the Casey’s in Wood River. It wasn’t until a coworker saw a story in the newspaper and asked Weber if she’d won that she realized it might be her.

Weber said she’ll be using her winnings to remodel her home and to buy a new vehicle.