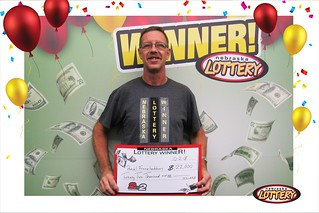 Daniel Franzluebbers of West Point won $22,000 playing 2by2 from the Nebraska Lottery.

While at the Nebraska Lottery offices to claim his prize on October 2, Franzluebbers said that he about fell over when he found out he was a winner.

The clerk at the gas station where he checked his ticket invited him behind the counter to see what he’d won and offered him a chair when his legs got a little wobbly.

“He came home crying,” Franzluebbers’ wife Betty said. “I thought somebody died. Then he told me and both of us cried.”

Franzluebbers said that he’s a daily player of 2by2 and that the numbers he plays represent his anniversary as well as his and Betty’s birthdays. He also plays MyDaY and Pick 5 on a daily basis as well.

The Franzluebbers are planning to use some of their winnings to pay some bills and buy a new recliner for Betty.

“You can’t expect to win if you don’t play,” he said. “I’ll have to play different numbers now though, I’m not that lucky.”