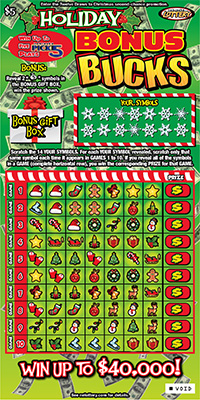 If you purchased a Holiday Bonus Bucks ticket, we ask that you fill out the information on the back of the ticket and mail it to the Prize Claim address shown on the back so it can be checked for prizes.

We know that our players look to us for exciting games and the chance to win great prizes. We also understand the disappointment this game has caused. That’s why we’re going to try to make this up to you as soon as possible. We will be posting updates on this page as soon as we have them.

11/5/18 - To date 150 of the approximately 400 Holiday Bonus Bucks tickets sold have been received for inspection. Based on the investigation by Nebraska Lottery Security staff, each ticket falls into one of the following categories:

In addition to examining each ticket, we have been negotiating with the ticket vendor, International Game Technology (IGT), to recover damages under the terms of our contract. We do not have a positive outcome on recovery of prizes for the erroneously printed tickets.

We share our players' desire to resolve this issue as quickly as possible. After reviewing the state statutes and regulations, we have determined that tickets not listed in the official file of winning tickets for the game cannot be paid. Therefore, we are moving ahead with the following course of action.

Payment for winning Holiday Bonus Bucks tickets has begun based on the official winning ticket file and should be complete in approximately one week. In addition to payment of any prizes won, a $5 Scratch coupon will be issued to players for each Holiday Bonus Bucks ticket submitted. Everyone who submitted tickets will also receive $100 in Nebraska Lottery Scratch coupons.

Scanned copies of your tickets will also be provided to you. If your Holiday Bonus Bucks tickets were non-winners, you can use the ticket copies to enter the 12 Draws to Christmas promotion at nelottery.com. Original tickets will be retained for verification if any of your entries are drawn.

We appreciate your patience and understanding during this extended process. Please contact us at lottery@nelottery.com if you have additional questions.

10/11/18 - To date 126 of the approximately 400 Holiday Bonus Bucks tickets sold have been received for inspection. Nebraska Lottery Security staff is examining every ticket submitted by players to determine if the ticket was affected by the manufacturing error. They are also researching the game files to find the predetermined prize amount for the ticket while also noting the prize amount shown on the ticket itself.

Using this information, we have contacted the ticket printer with our desired outcomes, including compensation for players. We requested they present a course of action as quickly as possible, and we are currently waiting for a response.

10/4/18 – All packs of Holiday Bonus Bucks have been returned from retailers, and 105 of the approximately 400 purchased tickets have been submitted for validation. Our Security staff is currently examining every Holiday Bonus Bucks ticket submitted by players to determine if the ticket was affected by the manufacturing error. We are also reviewing the State Lottery Act (Nebraska Revised Statutes Chapter 9 Sections 9-801 to 9-841), the Nebraska Lottery Regulations, and are working with the printing vendor regarding payments on improperly printed tickets.

We understand that players have questions about the payment process, and ask for your patience as we follow the relevant statutes and regulations to resolve the situation as quickly as possible. In addition to regular updates on this site, players will receive direct communication from us regarding the status of their prize claim.

9/27/18 – All packs of Holiday Bonus Bucks tickets on sale before the game was disabled have been recovered from retailers. The Nebraska Lottery is working with our printing vendor to reconstruct the approximately 400 purchased tickets and determine the actual prize amounts. This process is different from our regular validation procedures, so we do not have a set timeframe for replying to players who sent in Holiday Bonus Bucks tickets. More information will be posted here when the reconstruction process is complete.

What happened with the $5 Holiday Bonus Bucks game?

Due to a programming error, some Holiday Bonus Bucks tickets are showing winning combinations of symbols that do not match the predetermined result for that ticket.

The $5 Holiday Bonus Bucks Scratch game experienced an imager synchronization issue during the printing process. The synchronization issue caused the imaged symbols to appear with the wrong grids and in some cases, incorrectly resulted in the appearance of wins that were not part of the games prize structure.

This was an isolated incident that was unique to this game and it does not impact other instant games.

What is the Nebraska Lottery doing to address the issue?

Why do I need to send in my ticket?

Because the game has been deactivated, no tickets can be validated at Nebraska Lottery retailers. The physical ticket is required to determine prize amounts. Nebraska Lottery Regulations specify that no lottery prize can be paid without presenting a ticket for validation. A copy of a ticket cannot be used.

How long do I have to send in my ticket?

Holiday Bonus Bucks was closed on September 25, 2018, so any winning tickets must be claimed by March 24, 2019. Click here to learn more about the game closing process.

Will I get paid the amount shown on my ticket?

Every ticket we receive will be checked for prize amounts, and prizes that conform to the predetermined prize structure and the official file of validation numbers for winning tickets will be paid.

When can I expect to receive a response after sending in my ticket?

We are in the initial phase of investigating the programming issue with Holiday Bonus Bucks, so we do not have a timeframe for responding yet. However, we are committed to addressing player correspondence as quickly as possible.

Can non-winning Holiday Bonus Bucks tickets be entered in the 12 Draws to Christmas Second-Chance Promotion?

Non-winning Holiday Bonus Bucks will be accepted in the 12 Draws to Christmas Second-Chance Promotion. Any non-winning tickets we receive will be returned, and players will have to enter them in the contest using an MVP Club account.

In addition, a new $5 holiday Scratch game will be available in mid-October. When the new game arrives, it will be added as an eligible game for this promotion.

The Frequently Asked Questions will be updated as information is made available. Additional questions can be directed to lottery@nelottery.com.