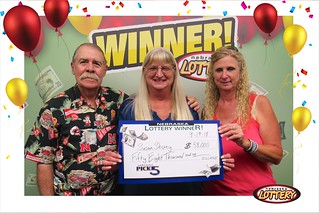 Shuey said she’s a daily player of Pick 5, but this is her first time winning big. She said she was pretty shocked when her husband Russ checked the numbers and told her she’d won.

“It was a complete surprise,” Shuey said. “You always hope for that opportunity.”

She won the jackpot, but Shuey said she’s planning to keep playing Pick 5. The $58,000 she won is going directly in the bank, she said.