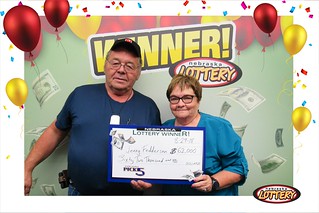 Feddersen said he’s a regular player of Pick 5, Powerball and Mega Millions, but this is the first time he’s hit it big.

Feddersen said they’ll be using the winnings to pay off their camper and their car.

Even though he hit the jackpot, Feddersen said he’ll probably keep playing Pick 5.

“I’ve got a couple tickets in my pocket right now,” he said.