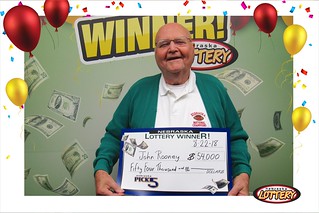 August 21 was more than just a lucky day for Rooney, it was also his 90th birthday. Rooney said he usually checks the numbers right at 9:30, but didn’t check them the night of the drawing.

“I was mad because the Cubs lost the game, so I went to bed early,” he said. “I checked the numbers this morning and I about fell out of my chair.”

Rooney said he’s been playing the same numbers daily since he played his first Nebraska Pick 5 game back in 1994. There’s no significance to those particular numbers, he said, he just bought a ticket with those numbers and kept playing them.

Now that he’s conquered Pick 5, Rooney said he’s got a good feeling about Lucky For Life. He won $150 about a week ago and that’s looking like the lucky game for him, he said. He’s been playing Pick 5 since the time the game started, but said this will probably be the last round of tickets he buys for it.

Rooney said he’s probably going to give all the money to his kids, grandkids and great-grandkids.