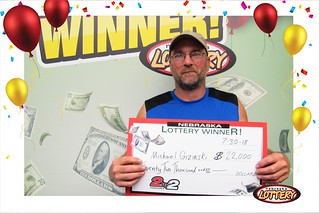 Michael Gizinski of Wood River won $22,000 playing 2by2 from the Nebraska Lottery.

Gizinski came into the Nebraska Lottery offices to claim his winnings on July 30and said thanks to a coupon, his first time playing 2by2 netted him the jackpot. Usually a Powerball or Mega Millions player, he took a chance and bought seven days’ worth of 2by2 Lotto tickets for $5.

He was on his way home from work when he heard a radio announcer say there was a winner in Wood River. Rain was pouring down, so he pulled over and checked his numbers on his phone. The numbers matched and he headed to the Nebraska Lottery office in Lincoln to claim the prize.

“I still don’t believe it,” he said as he left with his check.