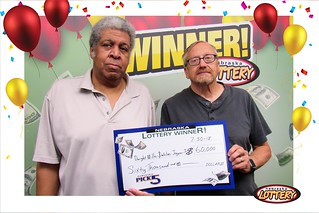 Joyner purchased the winning ticket from Hy-Vee Gas at 7608 Olson Drive in Papillion. The quick pick ticket contained five plays with one containing the winning numbers (07, 13, 22, 25, 35) from the July 28 drawing that.

Joyner and Miller have been pooling their money on Lotto tickets for about a year and a half, but they’ve been friends since they met while in the Air Force in 1981.

The win came as a huge surprise, Joyner said when the pair claimed their prize on July 30. He was checking the ticket he’d marked with their initials “W/D” on the Nebraska Lottery website and said they’d won a few dollars on Nebraska Pick 3 as well before looking at the Pick 5 numbers.

“I thought, ‘Those numbers look familiar,’” Joyner said. “I had to push myself away from the computer. You just don’t believe it.”

Miller said he’ll be using his share of the winnings to pay off his truck, and Joyner said he’s just going to enjoy looking at his bank statement for a while.