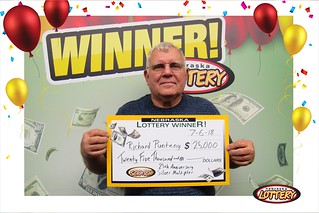 Punteney bought his winning ticket at Bucky’s #38 at 13736 Q St. in Omaha after winning a few extra bucks playing the same game. Punteney said he nealy jumped up and down when he discovered what he won.

Punteney said he’d use his winnings to pay off some bill and said he’ll probably split the $25,000 with his wife.