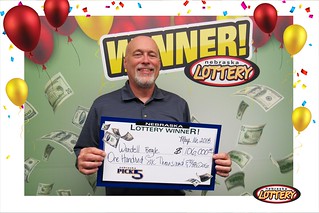 Bogle said he was thrilled when he found out his ticket was a winner after he checked the numbers on the Nebraska Lottery website, nelottery.com following the drawing.

When asked what he’d be doing with the $106,000, Bogle said he wasn’t sure yet, but thought he’d probably pay some bills and maybe have a little fun.