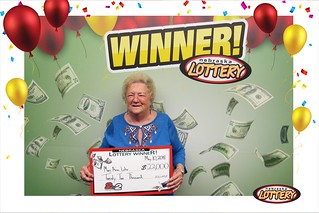 Mary Ann Lehr of Duncan won $22,000 playing 2by2 from the Nebraska Lottery.

Lehr purchased her winning ticket from Hy-Vee Food Store at 3010 23rd Street in Columbus. The ticket contained the winning Red ball numbers (10, 25) and White ball numbers (7, 12) from the May 6 drawing.

While claiming her prize, Lehr told lottery officials that she usually plays Pick 5, but decided to buy a couple of 2by2 plays while buying groceries. She said she thought she’d won $100 at first and was shocked to learn she’d taken home the grand prize.