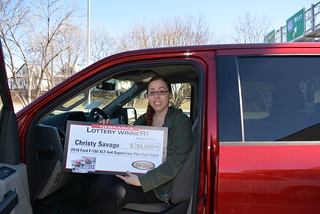 Christy Savage of Omaha is the second winner of a 2018 Ford F-150 XLT 4x$ SuperCrew Flex Fuel truck in the 23rd edition of the Nebraska Lottery’s $2 Truck$ & Buck$ Scratch game.

Savage purchased her winning Truck$ & Buck$ ticket at Bucky’s, 2765 S 13th Street in Omaha. Scratching the ticket, she revealed three keys in a row in a row in Game 2 for the corresponding truck prize.

Nebraska Lottery officials presented Russel with her prize on Friday, March 2 at Bucky’s. She said that this truck would be great family car for her and her husband. “I will be the one driving this one,” she said. “I’m the one who has experience driving bigger cars, he’s used to little cars.”