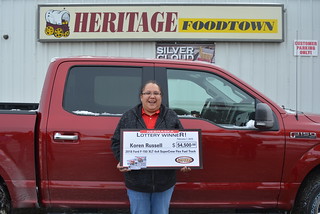 Koren Russell of Walthill is the first winner of a 2018 Ford F-150 XLT 4x4 SuperCrew Flex Fuel truck in the 23rd edition of the Nebraska Lottery’s $2 Truck$ & Buck$ Scratch game.

Nebraska Lottery officials presented Russell with her prize on Wednesday, February 7, at Heritage Foodtown. She said she had never purchased a Truck$ & Buck$ ticket before, but on a whim decided to buy one. “I had some time after work before I had to pick up my kids, so I bought a Truck$ & Buck$ ticket, a Prime For a Win ticket, and The Great 8 ticket,” said Russell. “On the Truck$ ticket the first thing I scratched off said ‘Try Again,’ so I thought, ‘This isn’t a great start.’” Moving on to the remaining games on the ticket, Russel scratched and revealed matching numbers in Game 3 along with a “TRUCK” symbol that indicated she had won the Ford F-150.