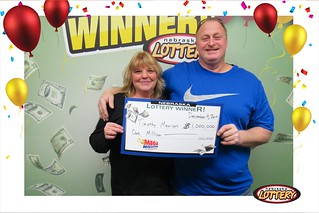 Timothy Manion of Omaha is Nebraska’s newest millionaire after winning a $1 million Mega Millions prize from the Nebraska Lottery.

Manion purchased his winning Mega Millions ticket at Kum & Go, 13149 Fort Street in Omaha. The five-play ticket contained one play with all five of the winning white ball numbers (16, 22, 40, 41, 59) from the Friday, December 1 drawing for $1 million. Manion is the fifth person to win a $1 million Mega Millions prize in Nebraska since the Nebraska Lottery joined the game in March 2010.

Manion wasted no time claiming his prize, arriving at Nebraska Lottery headquarters on Monday following the drawing. He told Lottery officials that he learned he had won after returning to the same Kum & Go where he purchased the ticket. “I stopped there Saturday morning, and the clerks were talking about selling a $1 million winning ticket, so I said, ‘Why not check mine?’” said Manion. “After scanning the ticket the clerk said, ‘It’s you! You’re the winner!’ I couldn’t believe it. It didn’t really sink in until we were on the way to Lincoln to turn it in.”

Manion told Lottery officials that he plans to buy a house and a truck using his winnings, and save the rest for the future.