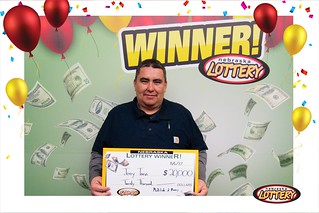 Jerry Tarin of Lyman won $20,000 playing Multitude of Money from the Nebraska Lottery.

Tarin purchased the winning ticket from Skippy’s located at 204 Jeffers Avenue in Lyman.

When he claimed his prize, Tarin told lottery officials that $1,000 is the most money he had won up until his $20,000 win and he does not yet know what he wants to do with his winnings.