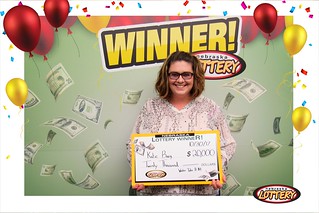 Katie Barg of Pierce won $20,000 playing Winter Takes It All from the Nebraska Lottery.

Barg purchased the winning ticket from Casey’s at 309 East Willow Street in Pierce.

When Barg claimed her prize, she told lottery officials that Pierce was a small enough town that everyone would know about her win by the time she got home. However, it was not so easy to share the news at first. “Nobody believe me when I told them,” she said. “I still can’t believe it and it’s sitting right in front of me.”

Barg plans to use the money for shopping.