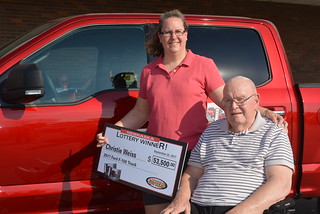 Christie Weiss of Omaha is the seventh winner of a 2017 Ford F-150 XLT 4x4 SuperCrew Flex Fuel truck in the 22nd edition of the Nebraska Lottery’s $2 Truck$ & Buck$ Scratch game.

Weiss and her sister have been purchasing Truck$ & Buck$ tickets all summer to try to win the truck prize for their father. “He always had a truck when we were growing up,” said Weiss. “When we heard that two more trucks were added to the game, that’s when we started buying tickets regularly. I took a bike tour this summer and bought Truck$ tickets in every town we stopped at.”

In the end, Weiss’s sister purchased the truck-winning ticket at Baker’s, 5555 North 90th Street in Omaha, and then gave the ticket to Weiss to claim the prize. Nebraska Lottery officials presented Weiss and her family with the prize Friday, September 22 at Baker’s. “It’s awesome,” said Weiss.

The 22nd edition of the Nebraska Lottery’s popular $2 Truck$ & Buck$ Scratch game featured the 2017 Ford F-150 XLT 4x4 SuperCrew Flex Fuel truck as its top prize. Players had the opportunity to win one of seven Ford F-150 trucks as well as $1.6 million in cash and Ethanol-enriched fuel prizes. The truck prize was valued at $53,500, which includes $1,289 for costs associated with ownership and state and federal withholding paid by the Nebraska Lottery of $2,675 and $13,375, respectively. The odds of winning the top prize in Truck$ & Buck$ were 1 in 300,000, while the overall odds of winning any prize were 1 in 3.17.