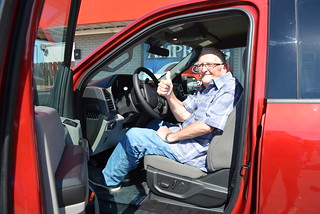 Nebraska Lottery officials presented Loften with his prize Wednesday, July 19 at Ampride. Loften said that he regularly purchases his tickets at Ampride, but didn’t expect to win a new truck. His winning Truck$ & Buck$ ticket contained matching numbers in Game 3 to win the truck prize. “I scratched off the ticket and there were two nines, so I thought I’d at least won a few bucks,” said Loften. “Then I saw the prize was a truck. It was astounding.”

As for his plans for the new vehicle, Loften said he plans to take it on a trip to Minnesota this August.

The 22nd edition of the Nebraska Lottery’s popular $2 Truck$ & Buck$ Scratch game features the 2017 Ford F-150 XLT 4x4 SuperCrew Flex Fuel truck as its top prize. Players have the opportunity to win one of seven Ford F-150 trucks as well as $1.6 million in cash and Ethanol-enriched fuel prizes. The truck prize is valued at $53,500, which includes $1,289 for costs associated with ownership and state and federal withholding paid by the Nebraska Lottery of $2,675 and $13,375, respectively. The odds of winning the top prize in Truck$ & Buck$ are 1 in 300,000, while the overall odds of winning any prize are 1 in 3.17.