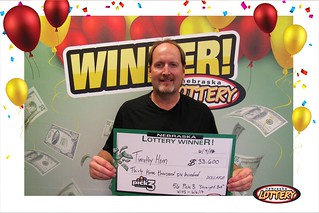 Horn has been a long time player of Nebraska Pick 3 and has won before using the birthdates of both his sons and father. His most recent win came through the numbers corresponding with the birthday of his youngest son.

When he claimed his prize June 7, Horn told Lottery officials that the win was something he had thought of often. “It feels pretty good, I will pay some bills and look at getting a new car. My son starts UNL in the fall – there is just lot of things you can do,” he said. “Yesterday it was just a dream and today, I can do it.”