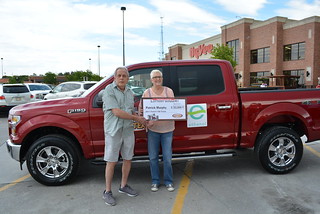 Patrick Murphy of Omaha is the fifth winner of a 2017 Ford F-150 XLT 4x4 SuperCrew Flex Fuel truck in the 22nd edition of the Nebraska Lottery’s $2 Truck$ & Buck$ Scratch game.

Nebraska Lottery officials presented Murphy with his prize Thursday, May 25 at Hy-Vee. Murphy said that he purchased the ticket and stuck it on the refrigerator door for a few days before his wife Laurie noticed it and scratched it. “I couldn’t believe it was true,” he said. “I had to check it three times. When I came to the store and had them verify the ticket, then I thought it must be real.”

“It’s a good feeling to actually win something,” said Murphy. “I can’t wait to drive it.”

The 22nd edition of the Nebraska Lottery’s popular $2 Truck$ & Buck$ Scratch game features the 2017 Ford F-150 XLT 4x4 SuperCrew Flex Fuel truck as its top prize. Players have the opportunity to win one of seven Ford F-150 trucks as well as $1.6 million in cash and Ethanol-enriched fuel prizes. The truck prize is valued at $53,500, which includes $1,289 for costs associated with ownership and state and federal withholding paid by the Nebraska Lottery of $2,675 and $13,375, respectively. The odds of winning the top prize in Truck$ & Buck$ are 1 in 300,000, while the overall odds of winning any prize are 1 in 3.17.