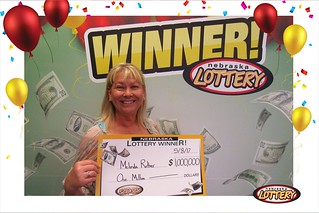 Rother has been purchasing Powerball tickets from Casey’s General Store at 1814 North Eddy St., in Grand Island for several years. Her most-recent winning ticket contained one play that matched all five of the winning white ball numbers (11, 21, 31, 41, 59) from the May 6 drawing for $1 million.

While claiming her prize May 8, Rother said she had no idea she had a winning ticket from Saturday’s drawing until late Sunday evening. She learned she had won while checking the winning numbers at nelottery.com with her husband.

Rother told Lottery officials she was surprised when she learned she had won. “I feel blessed every day when I get up,” she said. “This was the extra icing on the cupcake.”

Rother stated she has not made any definite plans for the prize yet, but said she would use the money to buy a new grill and help her sister pursue her degree as a Veterinary Technician. She also plans to share with her son as well as her niece and nephew. She and her husband’s lifestyles will stay the same and she plans to continue to teach Sunday school at her church as well as volunteering time at the Salvation Army. “We’re not really going to change anything,” she said. “We’re very blessed.”

Powerball is a multi-state jackpot game currently offered by 44 state lotteries, the District of Columbia, Puerto Rico and U.S. Virgin Islands. The odds of winning $1 million playing Powerball are 1 in 11,688,053 while the overall odds of winning any prize are 1 in 24.9.