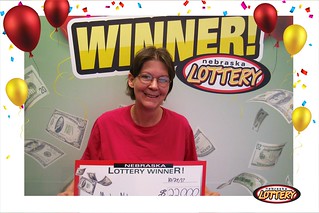 Marsha Nehring of Weeping Water won $22,003 playing 2by2 from the Nebraska Lottery.

While claiming her prize April 24, Nehring said that though she had won before, there is nothing quite like winning and it is not every day a person can walk away with such a large sum of money. “It’s all good, I’m happy,” she said. “I was very happy and hugged the clerk.”