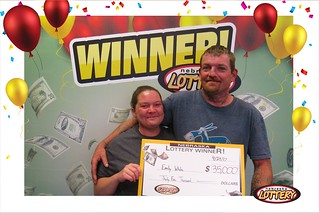 While claiming her prize April 24, White told Lottery officials the money is a much appreciated aid to her and her husband Nathan who moved to Kearney last year. The pair lived in a tent for several months before finding temporary accommodations in a hotel. They currently live in an apartment. White said this money would give the couple an opportunity to buy a place of their own. “It’s still like a dream,” she said. “It’s like we’re floating.”

In addition to a home, White plans to purchase a new, more reliable vehicle. She also plans to travel to California to visit her family. “We are so very thankful,” she said. “We don’t take anything for granted.”